Where to Visit in Costa Rica 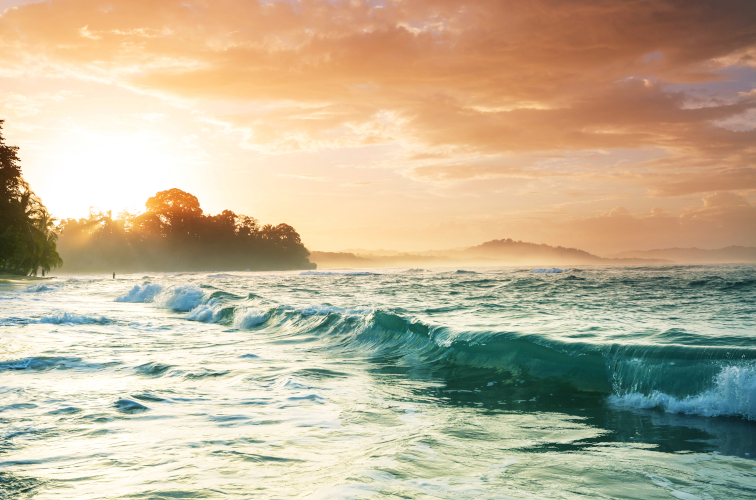 From the Pacific tropical dry forest to the volcanic rainforest to the jungles of the Caribbean, Costa Rica has much to offer. Despite its small size, Costa Rica is home to 12 different life zones and is part of a global biodiversity hotspot. Its environmental laws and expansive system of national parks and reserves have kept much of the country protected and pristine.

What follows are our suggestions for your visit: 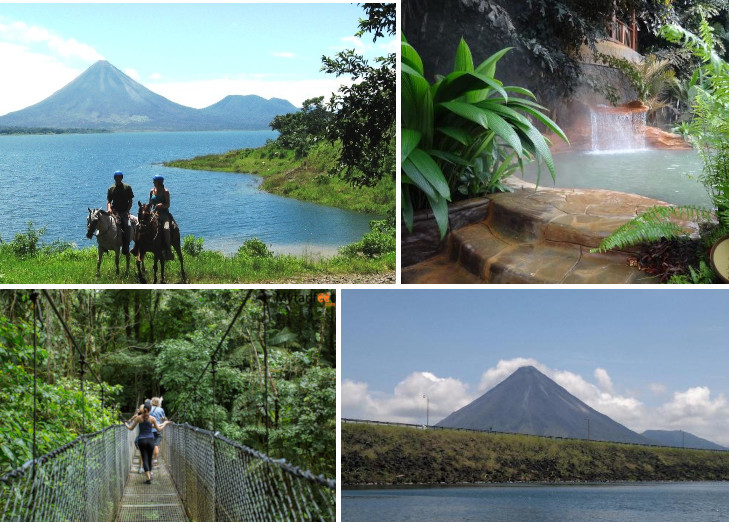 Arenal is considered the adventure capital of Costa Rica. The conically-shaped Arenal Volcano is perhaps the country’s most recognizable landmark and attracts visitors from around the world who come to soak in the nearby thermal hot springs and explore the surrounding rainforest.

Many of the hotels in the tourist hub of La Fortuna have onsite hot springs that guests can enjoy without leaving the premises. Consider taking a guided horseback riding tour and cooling down with a dip at La Fortuna Waterfall, which stands at over 200 feet (75 meters). Go for a hike at Arenal Volcano National Park to explore the area’s rich flora and fauna and enjoy some beautiful views of the volcano. For those seeking an adrenaline rush, check out the hanging bridges suspended in the rainforest canopy, enjoy some world-class zip-lining or take an exhilarating canyoning and waterfall rappelling tour. 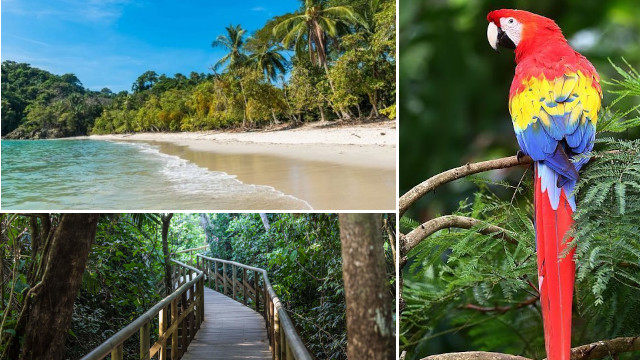 Tucked away in the Central Pacific are the lush rainforest, white sands and turquoise waters of Manuel Antonio. Every year, hundreds of thousands of people come to its national park to enjoy its pristine beach and see its impressive wildlife.

Most of the hotels in and around Manuel Antonio are located in the hills of the surrounding jungle, offering splendid views of the Pacific Ocean. You might see sloths, monkeys, scarlet macaws, and other animals from your hotel balcony.

Start your day early with a tour of the park and take a dip in the cool waters of the Pacific. Spend the afternoon relaxing on a catamaran tour, where you might be able to spot some dolphins or take a drive south to visit the mystical Nauyaca waterfalls. Finish up the day with some fresh-caught tuna or mahi mahi or head to the Falafel Bar for some authentic Middle Eastern fare.

Bordering Nicaragua on the northern Pacific coast is the province of Guanacaste. Known for its stunning beaches and tropical dry forest, Guanacaste is one of the most visited places in Costa Rica. The Liberia International Airport is located just 20 minutes from the ocean, making it a convenient destination for those who wish to maximize their beach time. 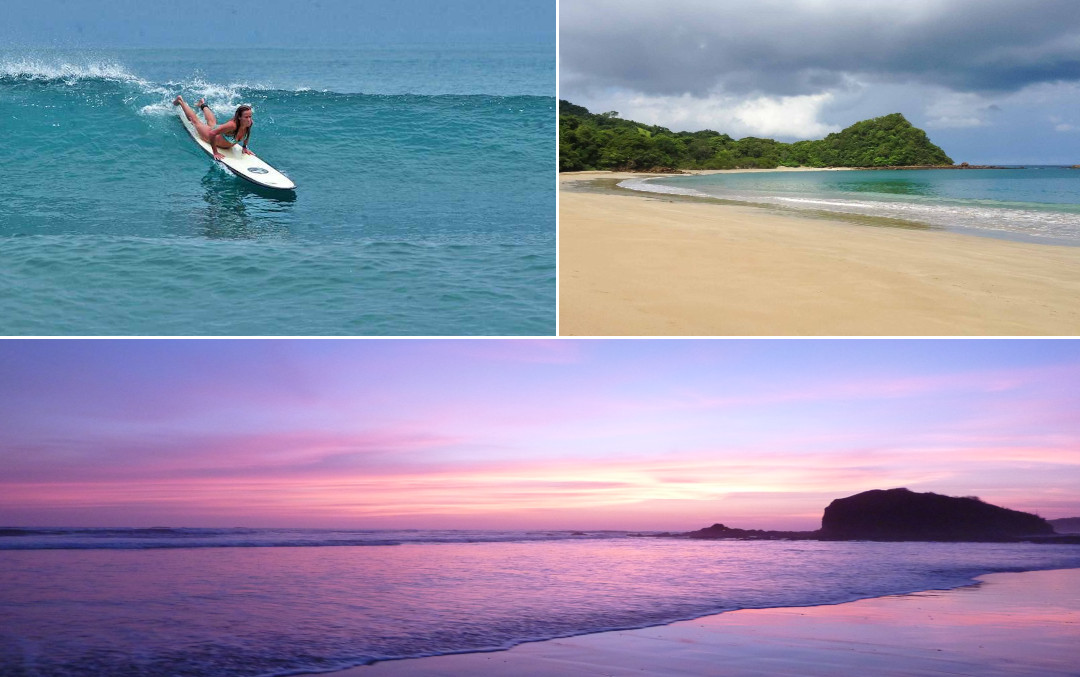 From the popular surfing hubs of Nosara and Samara on the Nicoya Peninsula to the cool blue waters of the Papagayo Bay, Guanacaste offers a diverse range of options for those wishing to explore the area. The lively beach towns of Playas del Coco and Tamarindo provide access to excellent restaurants, bars, and shops. For those looking to get away from the bustle for a few days, the beaches of Playa Langosta, Playa Grande, and Playa Carrillo offer more tranquil alternatives.

Unlike some other popular destinations, there is a wide range in the types of hotels. Most all-inclusive resorts are located in this region, including the Westin Resort on Playa Conchal, whose white sand beaches are composed of crushed seashells, and the Planet Hollywood overlooking the Culebra Bay. Boutique hotels such as Capitán Suizo in Tamarindo or Cala Luna on Playa Langosta can help deliver a more authentic Costa Rican experience.

Head out to one of the volcanoes at Rincón de la Vieja and Miravalles National Parks or take a historical tour of Santa Rosa National Park to learn about the epic battle in 1856 between Costa Rica and the American lawyer William Walker, who had imperial ambitions. If you are feeling adventurous, head out to Diamante Eco Adventure Park, which features an ocean view Superman-style zip-line that overlooks the ocean. 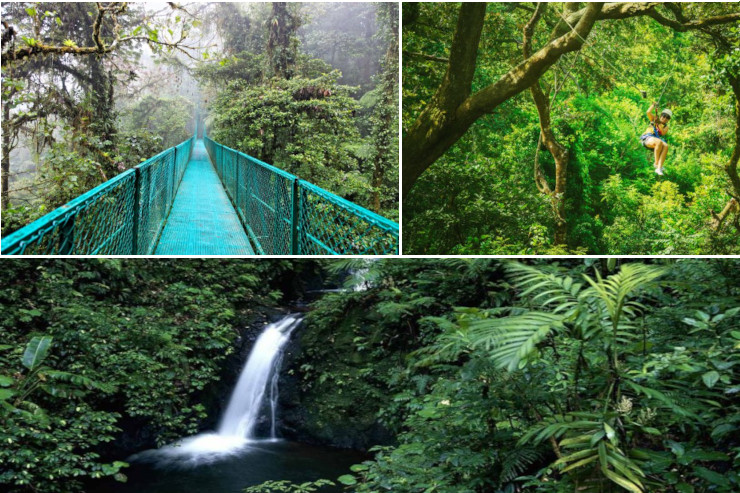 Nestled in the montane cloud forest is the small town of Monteverde. Founded by a group of Quakers in the mid-20th century, Monteverde has become one of Costa Rica’s most visited destinations.

Explore the region’s incredible flora and fauna with a guided tour of the Monteverde Cloud Forest Biological Reserve or Children’s Eternal Rainforest. Like Arenal, Monteverde offers excellent zip-lining and hanging bridges tours, which makes for a fun and exhilarating way to explore the cloud forest canopy. Home to over 400 species, the area is also a great site for birding enthusiasts. 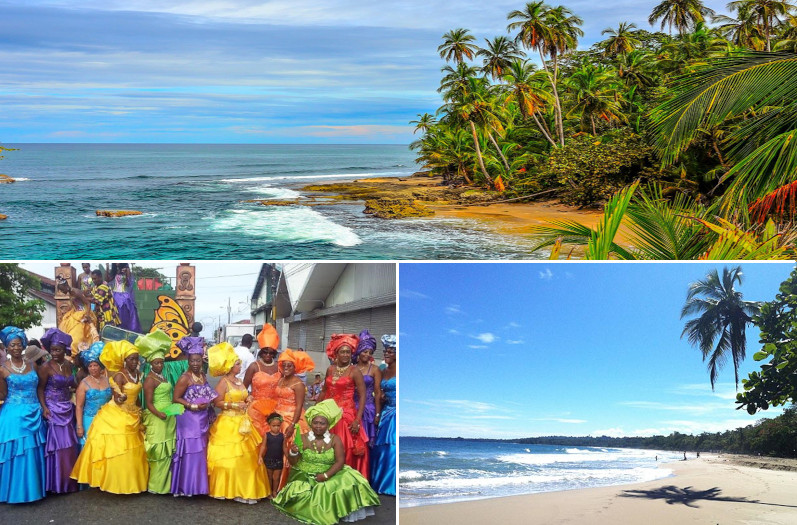 With its picturesque beaches, unique cuisine, and bohemian vibes, the Caribbean is a place like no other in Costa Rica. The strong cultural influence of its Afro-Costa Rican population, mostly descendants of Jamaican immigrants, and large indigenous presence give the eastern province of Limón a distinct character.

The sleepy town of Cahuita, home to Costa Rican calypso singer-songwriter Walter Ferguson, is the birthplace of the nation’s first national park. Hire one of the local guides to take you snorkeling along Cahuita’s reef before getting dropped off at the park’s main trail. Spend the afternoon at the Jaguar Rescue Center, which helps over 500 monkeys, sloths and other animals every year. Cool down with some live reggae and calypso music at one of the beachside bars in the happening town of Puerto Viejo de Talamanca.

Carribean-style cuisine is quite different from the rest of the country’s. Grab some fresh snapper or mackerel with rice and beans cooked in coconut milk at Lydia’s Place in Puerto Viejo. Try some jerk chicken next door at the Take it Easy cart on Playa Cocles. The area is also home to several international options as well, including the Israeli-owned Pita Bonita and Italian-owned Pecora Nera. 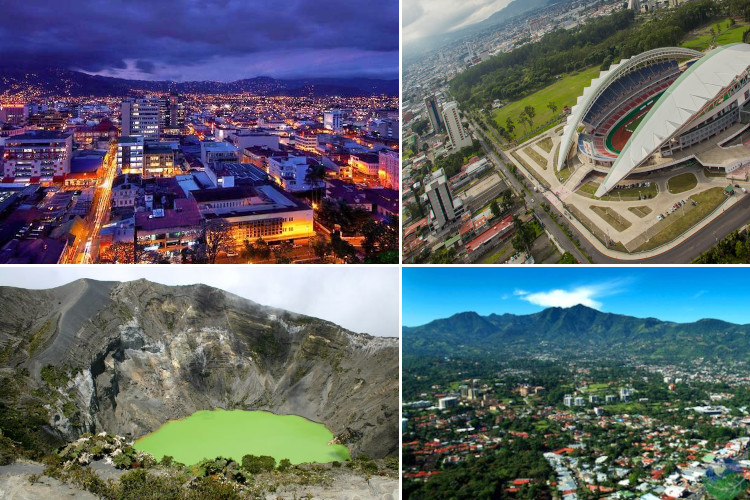 Downtown San José offers an enticing mix of museums, restaurants and shops for those seeking an urban experience in the tropics. Take a tour of the historic National Theater of Costa Rica that was built in the late 19th century. Head to the Plaza de la Democracia and visit the impressive collection of pre-Columbian artifacts at the Jade Museum. Go for a picnic at the wind turbines in the suburb of Santa Ana where you can see the Pacific Ocean on a clear day.

When in San José, start your day with a cup of coffee and fresh pastries at Restaurant Kalú in the trendy neighborhood of Barrio Escalante. Live like a local and grab a casado (traditional Costa Rican lunch) at one of the many local stands. For some fine dining, enjoy an authentic Argentinian meal at La Esquina de Buenos Aires, where you can feast on imported steak cuts and homemade pasta, and choose from an impressive collection of Malbec wines.

What to Do in Costa Rica